Almost every department is building a dummy for the Dummy Jump this Saturday. Many are being built under the cover of total secrecy somewhere deep in the garages of Grand Junction. Only one picture has surfaced...this is the "snow snake" built by Carl Felling of ski school. According to Carl it will be performing a back flip off the jump. 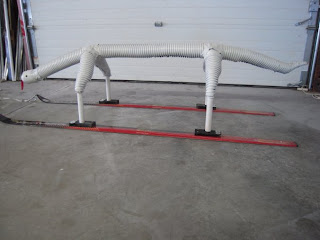 Much trash talking and preliminary boasts of success are filling the break rooms this week. Not to be outdone, we in Administration are attempting to put a dummy together on Friday night. That's right, those that actually planned this event a month ago are building a dummy the night before. Chances of success are slim, but the effort will be admirable. Ours will consist of random things we've gathered from our houses and backyards- old Salomon skis, a go-kart frame and a large stuffed animal. If you have anything to add, or ideas for our dummy, drop us a comment!
Posted by Powderhorn Resort at 2/17/2010 09:31:00 AM