Winter sport magazines are a great way to get stoked for season, get tips , keep up with the athletes, get competition details, read good editorials, and hear about those far off places that most of us will ever have the money to experience.

Here's a rundown of the different ski & snowboard magazines out there.

It's Still Coming Down

Yep it's still snowing....and we aren't complaining! Here's the report as of 9:00 this morning:

We are making snow today and tonight. The high today is only 12 degrees and tonight it should dip to -11. For a great Grand Mesa forecast check out http://www.crh.noaa.gov/forecast/MapClick.php?CityName=Grand+Mesa&state=CO&site=GJT
Posted by Powderhorn Resort at 11/29/2006 09:14:00 AM No comments: 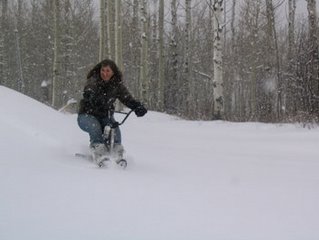 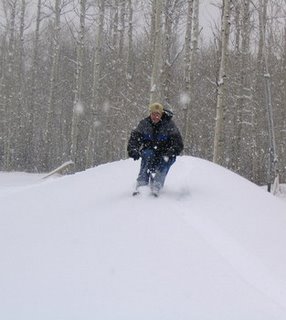 Let it snow! As of 9:00 this morning we had received 8 inches of snow. It has been snowing heavily and nonstop so far all day. I would venture a guess that there is at least a foot out there now. Some of us delinquents couldn't resist playing a little as you can see.

We are updating the snow report on our website daily now although we are not opening until December 7. Updated snow totals will be available around 3:00 today.
Posted by Powderhorn Resort at 11/28/2006 11:39:00 AM No comments:

Tech at the Mountain

John, a recent poster, had some great questions regarding wireless services at the mountain. We are indeed offering WiFi access this year in our base lodge and at the Inn at Wildewood (although some fees apply). We are excited to be able to offer this service this year and hope it enhances the visit to the mountain.

As far as cell phone service goes, this is something we've been working on for several years. Because of our physical location, we tend to be in a small black hole when it comes to service. From what I understand, there have been conversations with different companies to have a tower placed on the rim therefore providing perfect service not only for Powderhorn, but most of the Grand Mesa. Several companies have expressed strong interest although we have not seen a new tower yet.

Wax On Wax Off

If you haven't done it already, it's time to get your skis and boards tuned up and waiting by the door! Here's a do-it-yourself guide on waxing skis and snowboards if you've never done it before:

To help you get prepared for season, here are some terms to familiarize yourself with so you can talk the talk on the chairlift:

BAFL- "Big Air, Flat Landing" which can resulte in an explosion of equipment and body parts
Boilerplate/Bulletproof- snow that is so hard you might as well trade in for ice skates
Fib- a horrible attempt at covering up a fall by saying "I caught an edge"
Gnar- one of those ambiguous terms that makes you sound intense "I was shredding the gnar" a.k.a I was really just sipping tea in the lodge
Coach- Psycho babble for instructor (Powderhorn does have the best instructors & coaches)
Vermin- the easily spotted groups of skiers or snowboarders blocking access to a run, usually made up of "bros"
Bros- Fellow skiers and snowboarders living to slide the mountain. And yes, females can be bros
Sick- an adjective used to describe anything whether it makes sense or not. Most often spoken in the terrain park
Throw Down- can be used in past or present tense. Usually just means you did or are about to do something- "I'm going to go throw down on that rail" a.k.a. I'm just gonna go ride that rail.
Disco Sticks- super short slalom and twin tip skis capable of very short turns
Expert- Someone who is lying about their abilities
Face Plant- A fall that happens so quick that your face is the first thing to make contact with snow
Trustafarian- a rich but rugged ski bum pretending to be poor
Code Zero- Ski School radio call for lost child (ok being serious now: this does not happen at Powderhorn)
Toilet Turns- sloppy turns made from a you-know-what kind of position
Snotsicle- frozen discharge of the nose
Ski Bum- someone who has found a great alternative to working
Extreme- should only be taken seriously when used on trail maps (Extreme Terrain) otherwise it's just a silly marketing word
Screaming Starfish- someone yelling for help while cartwheeling down the hill
Poodle Turns- show dog turns made by Instructors even when not teaching
Manky or Danky- the smell of polyester underwear after a day on the mountain
Kodak Courage- trying something you otherwise would never do just because your buddy has a camera

Our website has a new look! Check it out at www.powderhorn.com

The new site has been a big project for us this year but it was really fun and interesting to go through the process. We will be adding more information to the site daily. Please feel free to email us from the site with any questions or if you've found something goofy, we'll get it taken care of. The Contact Us area can be used to ask questions or request brochures. Also make sure and sign up for the Powderhorn newsletter if you want the latest information on deals, events, etc.
Posted by Powderhorn Resort at 11/16/2006 11:30:00 AM 2 comments:

Anomaly TGR's newest 16mm and HD ski and snowboard release showcases the freakish and abnormal abilities of today's top athletes as they push the boundary of what is humanly possible. Don't miss out on this one!

A lot of you have been writing comments, emails, calling us, and sending telegrams (ok that one is a lie) asking if we are looking at an early opening. So I'll address those questions right now.

We are still scheduled to open Dec. 7 but if it's at all possible we will open early. But no, we will not open anytime around Thanksgiving next week. The base isn't quite built up enough for that yet. As soon as I hear anything official on an early opening I'll write about it on here, we'll have the info on our main website, our myspace, and you'll hear about it on the radio.

The current weather update: snow flurries are still coming off and on but the winds are gusting around 30 mph. That's making accumulation difficult. Another 1-3 inches is expected this afternoon and a 20% chance of snow tonight. By Friday the high is supposed to be 50 though! Let's hope not.

This is a great site for Grand Mesa weather http://www.crh.noaa.gov/forecasts/COZ009.php?warncounty=COC029&city=Grand+Mesa

So keep up those snow dances and check back for updates. Oh and a quick shout out to the folks from Hawaii coming early December- I hope we get to open for you guys!
Posted by Powderhorn Resort at 11/14/2006 11:10:00 AM No comments: 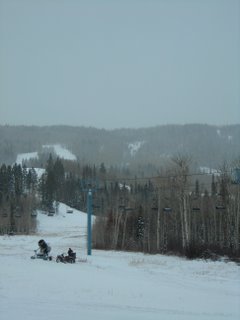 The clouds unloaded as they passed by Powderhorn this weekend! We've received 21 inches at the top of the mountain and 10 at the base area. Snowmaking operations have begun and season approaches even faster!

Snow is expected today through tomorrow night. We'll keep you updated on snow totals as it falls so check back often!
Posted by Powderhorn Resort at 11/13/2006 08:56:00 AM 1 comment:

What Are We Up To?

People often ask what it is we are doing up here when there is no snow or during pre-season. The answer: running around like chickens with our heads cut off! Ok there is actually more order than that.

But we are extremely busy preparing for the 06-07 season. Powderhorn employs a staff of about 25 people full time/year round. This is made up of administration, marketing, food & beverage (we host 25-30 weddings every summer), Inn at Wildewood, maintenance, and mountain operations. Our staff size will jump to about 250 for the winter season.

So what is it we are up to right now? Well, as I type this, the mountain guys are placing the picinic tables and ski racks around the base lodge. Then they will work on getting the snowmaking operations ready. Lift Maintenance is finishing all the final checks and certifications for all lifts. Food & Beverage has the Sunset Grille looking like a bomb went off trying to get everything turned over for season. Ticket office is cranking out season passes as fast as their fingers can fly over the keyboards. The Rental Shop is checking in all the new gear. Alpine Trader is burried in tons of new stuff, the manager has to be checked on periodically to make sure she isn't suffocating under a pile of hoodies. Inn at Wildewood has a couple weeks to take a breather and get those little projects in before season starts. Everyone in Administration seems to be on the phone all the time. Our IT Manager is setting up new computers, getting the ticket system ready to go and, as always, answering our stupid questions about why our computer KEEPS TYPING LIKE THIS WHEN WE DON'T WANT IT TO. And us marketing/sales folks just got back in town from another ski show, this time in Denver.

Whew! But all this makes us extremely excited because that means we're close....close to seeing cars pull in with skis and snowboards on top...close to powder days...close to getting people on skis or a snowboard for the first time...close another season of fun and making memories!
Posted by Powderhorn Resort at 11/07/2006 10:08:00 AM 1 comment:

We're excited to announce that the Smith Limo will be stopping by Powderhorn this year for a Rail Jam! You can jib the same thing you see in the magazines and videos. And it you don't want to risk flying off a limousine, it'll still be fun to watch everyone.

The limo will be here March 31 to celebrate our closing weekend. It's a ways off but just another thing to get excited for!

In case you aren't quite sure what the Smith Limo is: 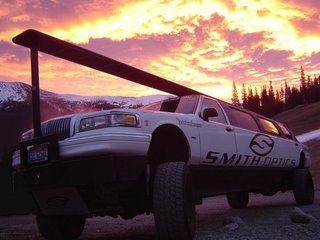