"On May 1st 2010, Mike Ehredt, a retired Postal Clerk and Army Veteran, touched the wheel of his jogger stroller in the Pacific Ocean in Astoria, OR and began an epic 4514 mile journey across the country to Honor and Remember Service Members lost in Iraq. He is currently placing flags that hold a yellow ribbon bearing the Name, Rank, Service, Age and Hometown of those whose dreams and ambitions were taken so quickly from us. The flags are being placed each mile along the roads he is traveling in reverse chronological order by date of death, till the very last flag is placed on the shores of the Atlantic in Rockland, Maine."
- From the Project America Run website. 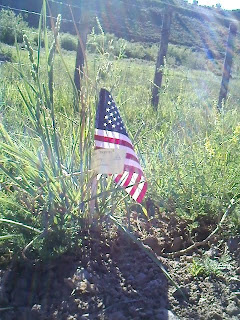 This week Mike's journey brought him through our area. You may have seen his story on KKCO 11 News. Our business services director put Mike up for the night and got to hear amazing stories of the people he's met so far on his journey.
After a well deserved snack, Mike was off and running to Paonia. 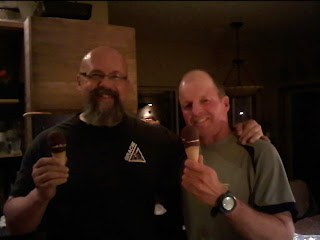